You must be logged in to register for an event.  Please login or create an account and return to this event to register.

GWP Members Only Program
When:
Wednesday, July 8, 2020
Where:
Webinar
Add to Calendar

Join this Tri-State Community Foundation Webinar to learn how to prepare your foundation to adapt and respond quickly to community crisis and disasters.

Anticipating community crises and preparing your foundation to adapt and respond quickly are key opportunities for community foundation leaders today. Hear from Mike Parks, president of The Dayton Foundation, as he shares how his foundation has responded to three distinct disasters – a history-making series of tornadoes in May 2019, a deadly mass shooting in August 2019 and the current coronavirus pandemic – and how each dictates different approaches in both the community and grants process.

Michael M. Parks has served as president of The Dayton Foundation since 2002. As president, he works to help people and organizations help others in the Dayton Region and beyond. He has elevated the Foundation’s role in fostering community collaborations and leadership initiatives, developed new, first-in-the-nation services for donors and not-for-profit organizations, and become a resource on philanthropy and the nonprofit community regionally and nationally. Founded in 1921, The Dayton Foundation is one of the first community foundations in the nation and today is among the top 5% of over 800 such foundations. Under Mike Parks’ leadership, the Foundation now has nearly 3,900 charitable funds, has tripled its assets - from $214 million in 2002 to $684 million today - and has awarded from Foundation funds more than 362,000 grants totaling over $970 million.

Mike currently serves on numerous area projects and initiatives, including the Learn to Earn Dayton Board of Directors, Greater Dayton Commission on Minority Inclusion, On Main Committee, University of Dayton Davis Center for Portfolio Management Advisory Board and as the chair for The Dayton Region New Market Fund Board. In 2015, he was recognized as the Outstanding Fundraising Executive by the Association of Fundraising Professionals, Greater Dayton Region Chapter. He also was named to the 2018 Dayton Business Journal’s 40 Under Forty Hall of Fame. A frequent speaker and writer on issues and trends impacting nonprofits, he also has been interviewed on the national PBS program, The NewsHour with Jim Lehrer.

Prior to joining the Foundation, Mr. Parks served the YMCA for 22 years, most recently as the President/CEO of the YMCA of Metropolitan Dayton. He and his wife, Amy, have been married for 37 years and have four children, ages 24 to 34, and four granddaughters.

The Tri-State Community Foundation Partnership webinars are designed for, but not exclusive to, community foundation staff and board members and is a partnership between Indiana Philanthropy Alliance/GIFT, Council of Michigan Foundations, and Philanthropy Ohio.

Note: The Tri-State CF Partnership Webinar Series is available to GWP members from our partners listed below. Since there is a fee for this program that is payable to our colleagues at IPA, a member of GWP staff will follow up with you after you complete registration on GWP's website to help you complete your registration and payment for this webinar. 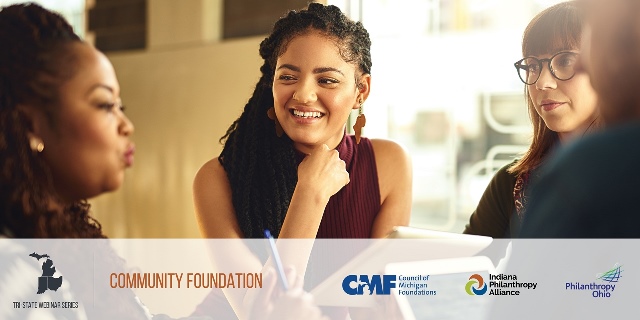 Please note that most GWP programs are open only to people affiliated with GWP Member Organizations.  Please review the event details to see if this program is open to the public.  To register for GWP programs, you must register for a user account on our website.

Join Your Nerdy Best Friend, aka Author Beth Ziesenis, for the second session in a three part book club, to discover how to use free and...

Join this NCFP Webinar to learn how families cultivate their philanthropic identity and nurture a family culture that reflects a shared...

Our primary concern is the continued health of our members and staff.  To slow potential exposure, GWP staff will work remotely and we have put our in-person gatherings on hold.  You should not notice any change in GWP’s ability to respond promptly to your questions and concerns.

Please be in touch with GWP as usual.  We are here to support you as funders and nonprofits respond to this unprecedented public-health challenge.